By MERCY NALUGOPosted  Thursday, July 24  2014 at  10:37
IN SUMMARY
The total allocation to local governments is Shs323.145 billion compared to Shs575.4 billion reserved for the Ministry of Health headquarters.

Civil society health rights organisations and law makers have identified key areas where they want government to direct more funding ahead of today’s meeting with the ministry of Health aimed at scrutinising budget allocations to the health sector.
In a joint meeting Wednesday, the legislators on the Parliamentary Health Committee concurred with health rights activists of the White Ribbon Alliance (WRA), Initiative for Social and Economic Rights and the Civil Society Budget Advocacy Group (CSBAG) agreed to push for increased funding to the Primary Health Care (PHC), maternal health and enhancing salaries of health workers.
“We as a committee have agreed to prioritise the recruitment of health workers. We shall also demand for answers on allocations to the Primary Health Care and why this area has been marginalised over time,” said the Mbarara Municipality MP, Dr Medard Bitekyerezo, while chairing the meeting.
This was after a submission by members of civil society who stressed that without paying special focus on ensuring an adequate human resource and primary health care funding especially at the various health centres, the health sector would remain crippled which could among others problems, accelerate maternal deaths.
“The dilemma is that government has approved a constant sum of Shs 15billion for Health centre 111s and Health Centres 1Vs countrywide but to us this is peanuts. Most women have died as a result of health workers lacking simple essentials like gloves, fuel for ambulances and lack of electricity as a result of failure to pay exorbitant Bills. Government must direct more funding in this field,” said Ms Robinah Biteyi, the executive director of WRA.
Ms Angella Nabwowe, the Programme Coordinator for Initiative for Social and Economic Rights and a member of CSBAG pointed out that Parliament in 2011 passed a resolution compelling the ministry of Health to submit to Parliament annual reports on maternal audits as a way of curbing maternal deaths and the ministry has never responded to their demand.
She identified the monitoring and evaluation slot in this financial year’s budget arguing that it has remained underfunded.
“The objectives of this according to the Ministerial Policy Statement is to conduct regular health sector performance, monitoring and evaluation, to ensure that standards and guidelines are developed, disseminated and used effectively at all levels. It is also to ensure that a regular support supervision system is established and strengthened at all levels among others”, she said.
In the Ministerial policy statement for the financial year 2014/2015, it is stated that only Shs41 billion  has been allocated as recurrent budget to run health service delivery in 137 local governments with 56 general Hospitals, 61 Private Not For Profit Hospitals and 4,205 lower health units for the last five years.
The total allocation to local governments is Shs323.145 billion compared to Shs575.4 billion reserved for the Ministry of Health headquarters.
“Concentrating resources at the national level is problematic since most people use the public health care system at local government level. Stagnation of this budget line amidst the ever increasing prices of goods and services, including utilities makes the running of health facilities difficult,” Ms Nabwowe said.
PHC budget involves buying hospital equipment that is used on day today activities, clearing the hospital’s electricity and water bills, maintaining the hygiene of the hospital and running ambulances.
While the primary school teachers are getting a 25percent salary increment as announced by the Finance Minister, Ms Maria Kiwanuka in this year’s budget, health workers will benefit from an overall Shs450 billion salary increment for all public servants in the country.
Midwives earn less than Shs350,000 monthly plus a Shs12,000 overtime allowance which the activists said is very little.
The ministry expressed the need to recruit 2400 health workers requiring an additional 23.4billion in wages. But going by the wage bill, the funds were not provided. The Health ministry, however, indicated in the 2014/2015 financial year that it can only recruit through the Health Service Commission an extra 800 health workers for as long as the money is availed.
Source: http://www.monitor.co.ug/News/National/Health-rights-activists-and-MPs-outline-health-budget-priorities/-/688334/2395560/-/item/1/-/gap0erz/-/index.html

Posted by WRA-Uganda at 12:06 PM No comments: Links to this post 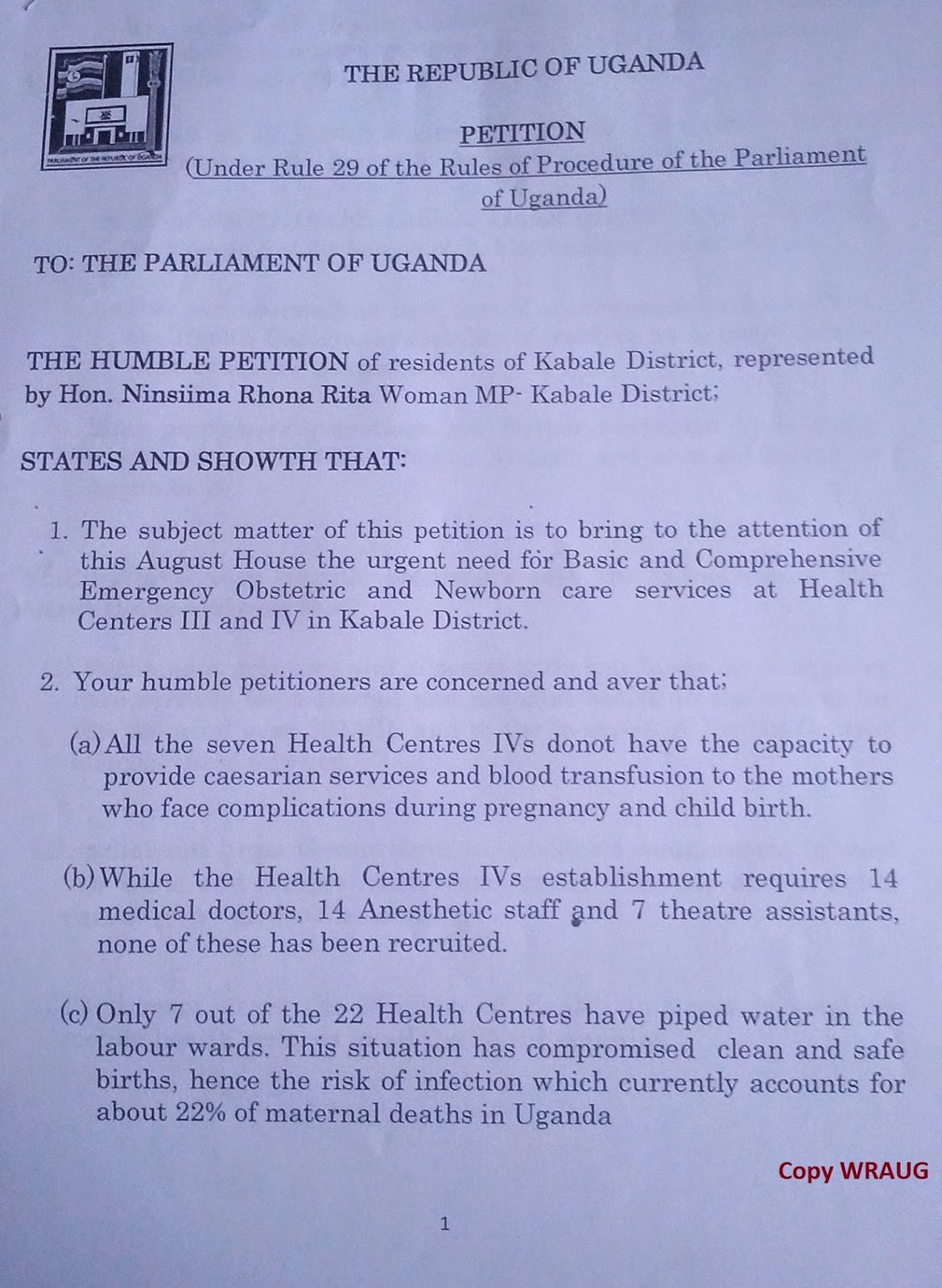 PARLIAMENT.
Two women representatives want Parliament to push the Executive to allocate more funds to obstetrics – a branch of medicine that deals with childbirth as well as midwifery.They say the amount the government has been allocating has compromised childbirth so much so that less than 40 per cent of the health centres have piped water in the maternity wards.
“This has compromised clean and safe births, which increases the risk of infections that currently account for about 22 per cent of maternal deaths in the country,” Ms Ronah Rita Ninsiima, the Kabale District Woman Representative, said on Tuesday when reading a petition by women from Kabale.She added that many health centres could not carry out caesarean sections and transfuse blood.
Relatedly, Ms Joy Atim Ongom, the Woman Representative of Lira District, said the government should meet “new-borns care services”.The women leader’s pleas – during yesterday’s plenary – come just weeks before the House starts appropriating money for the different government departments, one of which is the Ministry of Health.
Ms Rebecca Kadaga, the Speaker of Parliament, referred the petitions to the House Committee on Health.
The committee should scrutinise the petitions, hear from stakeholders, make recommendations and report back to the House within 45 days.However, in many cases, many a committee of Parliament do not complete the work within the 45 days.
Consequently, the people who would have rushed to Parliament for assistance assume the House has ignored their problem.Dr Chris Baryomunsi, the Member of Parliament of Kinkiizi East, said the House should consider whether it should form a special committee to handle petitions.
The Speaker said this could be because some petitions are supposed to be dealt with by some government committees.
editorial@ug.nationmedia.com
Source: http://www.monitor.co.ug/News/National/Women-MPs-want-more-funding-for-childbirth/-/688334/2385158/-/4vslc1z/-/index.html
Posted by WRA-Uganda at 1:47 AM No comments: Links to this post