Members on the Parliament Committee on Health were shocked when they realized that all the theaters in health center III and IVs in Lira district are dilapidated and non-functional. This was during  the committee’s  fact finding field visit to Lira health facilities following a petition to Parliament on the low status of life-saving emergency services for pregnant women and newborns by the community of Lira district. The petition was laid on table by Lira district woman Member of Parliament Hon. Joy Atim Ongom on 15th July 2014.

The committee was amazed to discover  that the accommodation facilities at the health centre III and IVs were abandoned and no single health worker was present  at Anyangatir and Barapwo Health Centre III. Lira District Health Officer Dr. Kusolo Peter noted that as a result, patients prefer to go to Lira Regional Referral Hospital which has led to over congestion in the hospital especially the labor ward.
Hon. Lematia Ruth who is the Vice Chairperson of the Parliament Health Committee noted that  Uganda can prevent maternal and newly born deaths by ensuring that  women have immediate access to basic and comprehensive life-saving emergency services in the health Centers.  She stressed that  99 percent of all maternal deaths are preventable since the causes are known.  She added that the continuous death of women and their newborns is a sad reminder that Uganda  not doing enough to prevent the death of women during pregnancy and childbirth.
Lira district woman Member of Parliament Hon. Joy Atim Ongom who is also a member of the committee noted that government has to ensure that enough funds are budgeted to improve on the infrastructure and employ qualified health workers in all health centres. She urged women, husbands, families and the community, to involve themselves in maternal health issues so that women feel safe while giving birth to life.

Posted by WRA-Uganda at 7:56 AM No comments: Links to this post

Medical staff at the Butabika National Referral Hospital in Uganda. PHOTO | FILE |  NATION MEDIA GROUP
By Julius Barigaba
Even as Ugandans await a ruling on the temporary injunction to stop the government exporting over 250 health workers to Trinidad and Tobago, it has emerged that the recruitment was riddled with corruption.
Amid reports that unqualified people paid up to Ush7 million ($2,456) to be shortlisted, Kampala became wary of a backlash from the Trinidad and Tobago government. It placed advertisements in the media to isolate people cited in bribery claims ahead of a thorough screening of the shortlisted workers.
Last August, the Ministry of Foreign Affairs shortlisted 450 doctors, nurses and midwives drawn mainly from public health institutions to be exported to Trinidad and Tobago on three-year contracts. Sources say officials from the Caribbean island nation will travel to Kampala “anytime soon” to help with the selection of the final 263 health workers who have the required skills.
READ: Plan to export medical staff to Trinidad lands Uganda govt in court
A source familiar with the recruitment told The EastAfrican that, among this number, there are unqualified people who bribed their way into the shortlist.
“People who are not qualified doctors or health workers paid to get shortlisted,” the source claimed. “Are you surprised? This is Uganda.”
‘No bribery’
But Foreign Affairs Ministry spokesman Fred Opolot said if indeed the claims are true, the victims should come forward and name the perpetrators of the fraud.
“We ran adverts and said that people making these allegations should come to the Ministry of Foreign Affairs and the police and file official complaints but no one has come forward,” said Mr Opolot. “As far as we are concerned, we don’t know of any bribery in this exercise.”
In November last year, The EastAfrican reported that the Institute of Public Policy Research (IPPR) had sued the Attorney-General, seeking to block medical worker exports to the Caribbeans by the Foreign Affairs Ministry.
The High Court will rule on March 2 on the case, in which IRRP’s lawyer, Justinian Kateera, argues that “besides being contrary to public health policy it is also unethical, irrational and unconstitutional for Uganda to deny its own citizens the much-needed health workers.”
On February 5, a coalition of about 40 civil society organisations also issued a statement questioning the logic of the Ministries of Foreign Affairs and Health to export medics to a country whose health indicators and patient-to-health worker ratios are way higher than Uganda’s.
“The government should be ashamed,” said Sam Senfuka of White Ribbons Alliance Uganda. “They are supporting the export of our most prized resource — our health workers, who are in scarce supply in the health system.
“Export should only be considered if a country has a surplus; this is basic economics. We have thoroughly analysed this plan; it is wrong-headed and must be stopped.”
SOURCE: The East African- http://www.theeastafrican.co.ke/news/Graft-claims-hit-Uganda-medic-export-scheme/-/2558/2615980/-/x8utqbz/-/index.html
Posted by WRA-Uganda at 12:41 AM No comments: Links to this post


A coalition of civil society organisations has added its voice to the criticism against Government’s move to export about 300 health workers to Trinidad and Tobago.
Addressing a joint press conference Thursday in Ntinda at Action Group for Health Human Rights and HIV/AIDS (AGHA) offices, the health activists demanded that Government stops defying its own evidence and substantially increases investment in the health sector.

The activists’ protestation comes barely a week after the Institute of Public Policy and Research (IPPR), a local think-tank, sued Government in what it says is one of the first ever public interest litigation cases concerning a medical "brain drain".

“Government should be ashamed. They are supporting the export of our most prized resource – our health workers – who are in scarce supply in the health system and are a national treasure,” said Sam Senfuka of White Ribbon Alliance Uganda in a joint press statement.
“Export should only be considered if a country has surplus; that is basic economics. We have thoroughly analyzed this plan and it is wrong headed and must be stopped,” added Senfuka.
Joshua Wamboga, the Executive Director of Uganda Alliance of Patients Organization (UAPO), said the implementation of the plan would increase suffering and preventable death in Uganda especially among pregnant women, newborns, HIV victims, tuberculosis and malaria victims and other leading causes of preventable death.
“Government should be increasing health workers’ remuneration, improving working conditions and increasing the wage bill so that our clinics are finally saturated with motivated health workers. Instead, our duty bearers are defying their own evidence and want to actively support health workers to leave. We will not allow this to happen,”     said Wamboga.
Wamboga explained that their preliminary analysis of the Government plan indicates that any remittance generated by health workers exported overseas would fail to compensate for the economic costs associated with catastrophic illness and increased rates of death.
Uganda Nurses and Midwives Union (UNMU) president, Janet Obuni, said Uganda has failed to live upto the Abuja Declaration’s call for African states to allocate 15% of their national budgets to the health sector, leaving the sector in a sorry state.
“Uganda’s health budget is between 8 and 9% of the total national budget, which is way below the Abuja Declaration standard. We have a heavy disease burden but government is not investing in the health sector. Uganda’s current doctor to patient ratio is 1:15, 000; nurses to patient is 1:7, 000 and midwive to patient ratio is 1:9,000. This is against the World Health Organisation’s (WHO) required ratio of one doctor to 1500 patients, one nurse to 700 patients and one midwife to 1000 patients,” said Obuni.
Claire Mugisha, AGHA Advocacy Programme Officer, said the current national estimate of the quantity of health workers stands at 40,67 nurses and midwives and 4, 449 doctors, serving a total population of 35 million Ugandans.
Joyce Lucy Atim, UNMU national treasurer, claimed that some of the people listed on the Ministry of Foreign Affairs website are not qualified health workers, arguing that they were recruited following influence from their relatives and friends in the Ministries of Health and Foreign Affairs.
Ministry of Health Permanent Secretary, Dr. Asuman Lukwago, said the reason why Government decided to use the Ministry of Foreign Affairs to recruit health workers for export to Trinidad and Tobago is because it is foreign relations
affair.
However, Lukwago said the Ministry of Health was involved in the selection process through the Health Service Commission.
“Those questioning the credibility of the shortlisted health workers have no competence and authority to do so. They can only come out to speak about it after consulting us,” said Lukwago.
He added that the decision to export health workers is aimed at arresting the scenario where most of them have drowned in the Mediterranean while trying to cross to overseas in search for green pastures.
“We don’t know how many health workers have died in the sea trying to cross to Europe and other developed countries. What government did was a formalization to make sure that things work out for them legally instead of them risking their lives,” said Lukwago.

Source, New Vision: http://www.newvision.co.ug/article/fullstory.aspx?story_id=664520&catid=1&mid=53&utm_source=twitterfeed&utm_medium=twitter
Posted by WRA-Uganda at 3:07 AM No comments: Links to this post 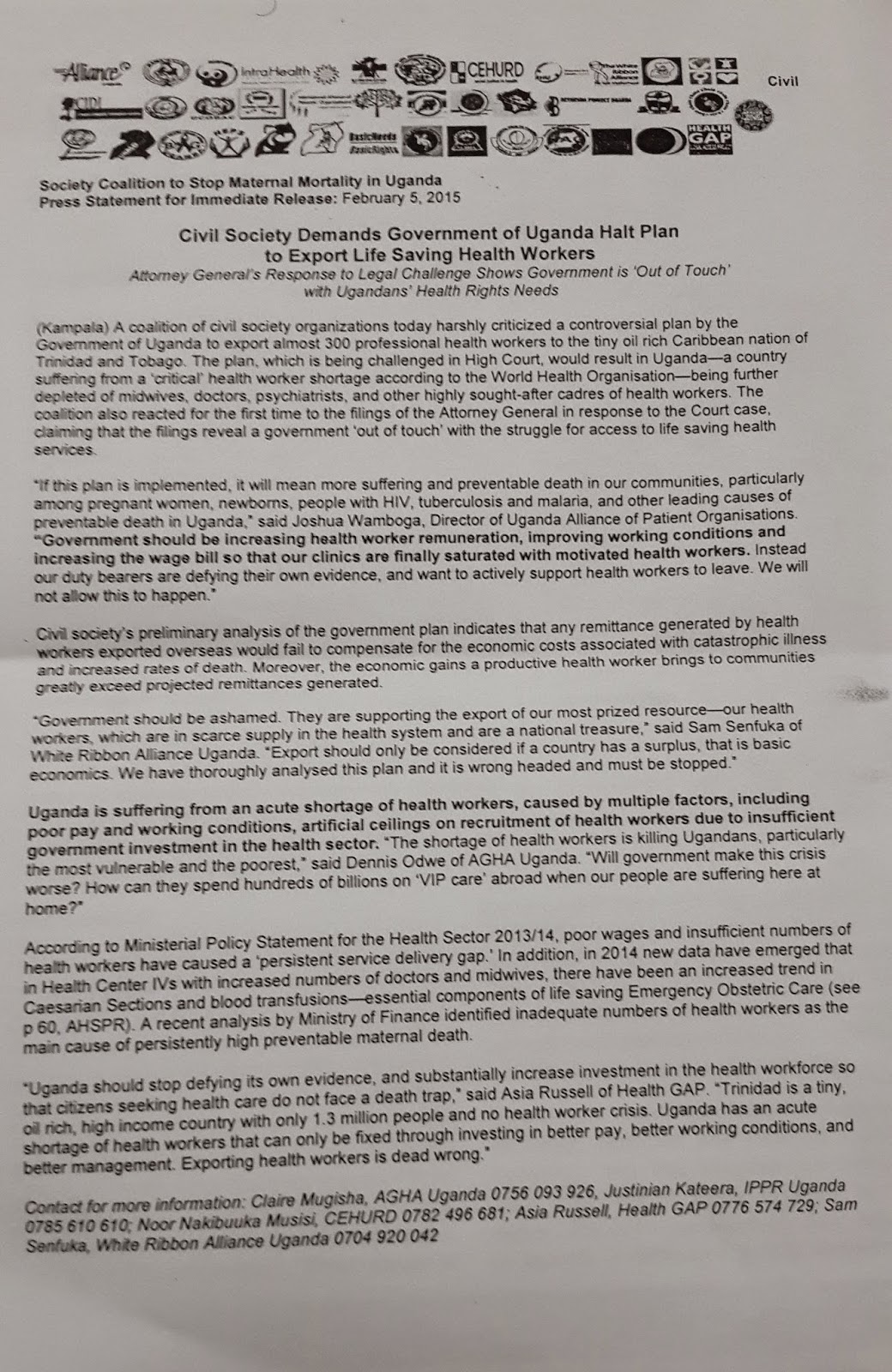 Posted by WRA-Uganda at 1:07 PM No comments: Links to this post