Its 11:00am 26th March 2011.Youth journey from their respective areas around Kampala to embrace the youth concert at Makerere Freedom Square which is 1kilometre west of the city center.
Every equipment necessary for the success of the concert is ready to do work: the cameras to capture, the stall for exhibition, Public Address system, stage, film screen for flashing of safe motherhood massages, tents are ready waiting for job and the whole place is decorated with WRA colors and massages. Security is tight- policewomen and men are on guard.
Gates are open at 12:00noon and activities like exhibition, registration of members start. The concert officially begins at 3:00pm with speeches introducing WRA and its overall objectives. The National and the university anthems are sung.
Performances commence amid youth flowing in bigger numbers; from one musician to a comedian and then to musician. The upcoming performers start and make the stage more fascinating for the viewers. One wonders whether they are up-coming; the performers sound as if they are genius!
The crowd cheers on and dance along to various songs and performances, some based on safe motherhood and others just entertaining the crowd on different social issues. WRA’s Musiima Hillary makes a tremendous performance as he sings safe motherhood songs and is joined by WRA-Uganda team dancing and singing along!
Quiz about Safe motherhood and crowd warming activities that keep them involved are conducted. Some participants answer questions and win prizes like tee shirts.
The Chief Guest; Mr. Mondo Kyateka, Commissioner for Youth and Child Affairs is also seen jigging!
Importantly, whoever comes on stage throws massages about safe motherhood! Regrets of 16 women dying every day in the country is heard throughout the concert with an emphasis that this is unacceptable.
Amidst amusement and cheers, organizing committee hands over a framed letter to the Chief Guest; Mr. Mondo Kyateka; asking him to deliver the contained message to parliamentarians to support safe motherhood initiatives, and also lobby  Government to increase funding to Maternal Health.
That was the mood in which the youth concert was conducted.
On handing over a letter to the Chief Guest, Mr. Mondo Kyateka pledged on behalf of government to do whatever it takes to support safe motherhood, and he promised to involve parliamentarians in promoting maternal and newborn health in the country.
A collective statement was printed on a banner workshop and signed by participants expressing the need for a change to promote maternal health in . The statement suggests that:
“Our generation will not tolerate girls and women dying during pregnancy and childbirth.  Change starts now.  We will play our part to prevent unwanted pregnancies, to raise awareness in our communities and to encourage the girls and women to seek for skilled birth attendance”. The statement adds:  “With this we want our Government to ensure that every pregnant woman has access to skilled birth attendance; to fill the gap of 2,000 midwives and ensure that health workers are motivated and have the necessary supplies and equipment to provide essential care for women during pregnancy and childbirth; and to increase financial resources for health from current 9% of the National Budget to 15%”, as committed in the Abuja Declaration 2001.
WRA worked with other organizations which provided services, HIV/AIDS voluntary Counseling and testing plus exhibition. These included Generation Free of HIV/AIDS club in Makerere, TASO Uganda, and Labor Ward foundation, Aids Information Centre and MJAB.
Other partners included radio stations like Capital FM, NBSt.v, and radio one which offered free and subsidized airtime for publicity.
Performances from big artistes like Bobi Wine, Navio, Michael Ross, Lillian and M.O.G among others left the youth speechless and demanding for more.  Youth were encouraged to work hand in hand with WRA to support safe motherhood and also to carry the message back to their friends and communities to make every one accountable for saving pregnant women and newborn babies. 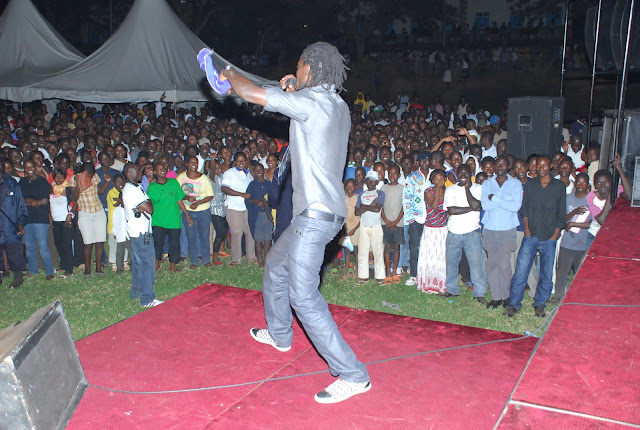 Mr. Bobi Wine performing during the concert
Other artistes that performed at the event include: CASTRO, BREAKDANCE PROJECT UGANDA, WRA-U DRAMA GROUP, STELLA MARIS, ETHEL (a midwife at Mulago Hospital and member of WRA), MAXI, CEASURAS and GERALD.
The concert was organized in a bid to: Increase public awareness and mobilize action for safe motherhood, Ignite action at the community, health service delivery and policy levels, Mobilize and energize the youth for safe motherhood and build alliance’s partnership with other stake organizations.
Different messages on banners, flyers, and stickers, were distributed around secondary schools, universities, towns, public places, and also hanged around the venue whereas others were disseminated during the concert. Other items supplied at the venue were Tee shirts, Paper caps, Bandanas, Canvas Banner and Ribbons.
The concert left the youth speechless and demanding for more.  Youth were encouraged to work hand in hand with WRA to support safe motherhood and also to carry the message back to their friends and communities to make every one accountable for saving pregnant women and newborn babies. The event officially ended at 11:00pm.
The number of participants is estimated at 3000 beyond 1000 that had been targeted. About 600 new members were registered.
The Concert was organized by WRA Uganda in collaboration with the youth. Its success is attributed to team work, commitment and publicity strategies that proved effective when the youth turned up in big numbers. 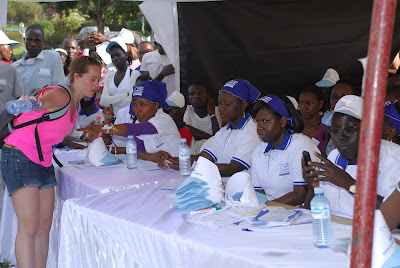 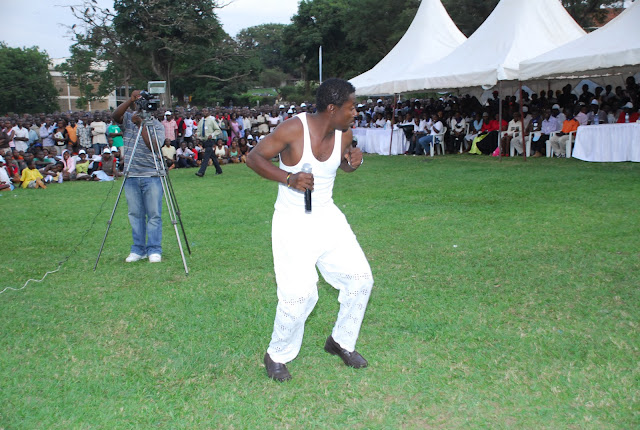 MOG (Man of God) all the way from Nigeria nearly cracked peoples ribs with his Nigerian music, dances punctuated by comedy
Posted by WRA-Uganda at 3:13 AM