The Parliament of Uganda hosted the 126th Assembly of the Inter Parliamentary Union (IPU) from 31st March to 5th April 2012 in Kampala under the  theme “Parliaments and People: Bridging the Gap”
In the assembly parliamentarians  from over 120 countries met to discuss women’s and children’s  health from a human rights perspective - as part of the resolution “Access to Health as a Basic Right: The Role of Parliaments in Addressing Key Challenges to Securing the Health of Women and Children.” -  They also discussed the crucial role that Parliaments and individual parliamentarians have to play in order to realize better health for women and children.
The IPU’s focus on women’s and children’s health was due to prevailing alarming global statistics where: every day an estimated 1,000 mothers die due to pregnancy related complication. This is 358,000 deaths every year (UN 2008). 99% of these deaths occur in Sub Saharan Africa and South East Asia; the vast majority of these deaths are entirely preventable when there is access to a skilled health worker. For every woman that dies in childbirth, 30 more women have to live with long term debilitating conditions such as fistula.
These disgraceful statistics are making it clear that urgent action is needed at all levels to accelerate progress towards reduction of maternal deaths (MDG 5) by 75% by 2015.
The White Ribbon Alliance joined a coalition of civil society organizations working in maternal newborn and child health in Uganda and organized a number of successful side events and activities around the IPU. This included, media activities- Press Conference, Press Statement, Radio and TV debates, the White Ribbon Citizen News desk (http://www.whiteribbonalliance.org/index.cfm/citizen-voice/), press supplement (http://www.wrauganda.blogspot.com/2012/04/civil-society-coalition-on-maternal.html), radio and TV debates.
Together we organized four panel discussions on maternal, newborn and child health, child nutrition and sustainable development with a mix of panelists and perspectives from Uganda and elsewhere. In the panels we analyzed the draft resolution on access to health and submitted recommendations for amendments to strengthen the wording of the resolution. 50% of the CSOs recommendations were considered in the final draft resolution.
The IPU recognized the vital role CSOs play in supporting Governments in realizing the commitments to women’s and children’s health and opened space for us to add value to the assembly’s final outcomes.
Working in a coalition was successful in giving CSOs a united voice and helping to galvanizing and strengthening efforts. Moreover the CSOs working in close partnership with Parliament of Uganda (the host) helped to strengthen the linkage between parliaments and the people, we will build on these partnerships for future activities in Uganda.
Maternal Health Panel
White Ribbon Alliance (WRA) Uganda coordinated the panel discussion on maternal health under the topic: Accelerating the Reduction of Maternal and Newborn Deaths by 2015: The role of Parliamentarians. Panelists presented on issues of accountability and commitments, human resources for health and health financing as well as sharing parliamentary experiences, lessons and challenges in legislation, budgeting and oversight for maternal health. These sparked off honest debate among the audience composed of MPs, CSO representatives, health workers and health professional bodies, academia, WRA members among others. 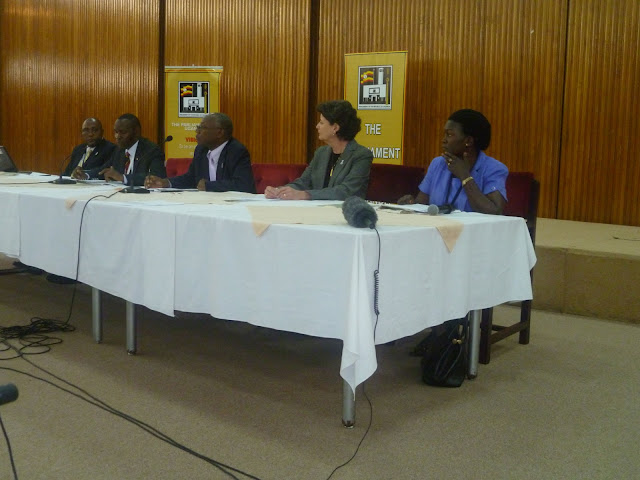 Panelists from L-R: Dr. John Nduba (AMREF), Hon. Alex Byarugaba (MDGs Forum of Parliament), Dr. Jotham Musinguzi (Moderator), Ms Theresa Shaver (WRA Global) and Hon. Sylvia Namabidde (MP Uganda)
In her presentation, WRA Global President Ms Theresa Shaver said that: ''In many ways, these are good times for all who care about the health of women and children. It’s becoming increasingly clear that when governments invest in health workers – trained professionals with midwifery skills – and make sure that they are employed, and are well supported within a functioning health care system, they save the lives of millions of women and their newborns around the world.”
She noted that joint advocacy has raised much of the necessary political will. Global leaders now recognize that the health of women is key to achieving the Millennium Development Goals. The September 2010 launch of the UN Secretary General’s ‘Global Strategy for Women’s and Children’s Health’ has led to $70 billion worth of financial, policy and service delivery commitments from governments, multilateral organizations, the private sector and civil society.
“Now it’s time for us all to turn those pledges into reality. The international community is rising to the challenge with a strong focus on implementation and accountability. Progress is being carefully monitored, while together we are pushing for new commitments from governments and other sectors,” She added
Dr. John Nduba, Director, Reproductive and Child Health at AMREF) said that many African countries have not met 50% of the 2001 Abuja target for a health budget of 15% of GDP, health systems in Sub Saharan Africa are dilapidated and under resourced. Health budgets are not gender analyzed making the needs of women and children receive low priority and policies like persistence of user fees. He asked Parliaments to accelerate Progress towards MDGs 4 and 5 by increasing the health budget towards 15% of GDP and demanding governments’ action on commitments made to the UN Secretary General’s Global Strategy for Women’s and Children’s Health.
Hon. Sylvia Namabidde Uganda MP highlighted some of the achievements the Ugandan parliament has made amidst challenges. She said that as peoples’ representatives, they speak on behalf of women and children and also represent the people in dealing with the executive arm of government. “We have used this mandate to ask Ministers questions on the floor of Parliament and also sponsor motions on matters related to maternal health. No matter how well laws and policies are designed, they won’t be effective if there is no funding to support their implementation.” She cautioned.

“We managed to pass US $130million World Bank loan for reproductive health and $30million was specifically to finance the Road-map to accelerate reduction of maternal and new born mortality. However, our oversight function is affected when Audit reports are received late and when government does not allow sufficient access to information and participation in joint health sector reviews.” She revealed.
Moving Forward
It was a busy week for WRA Uganda and our civil society partners; we made progress in raising the profile of women and children to parliamentarians and encouraging them to take action, to keep this momentum up. There are still a number of things we need to do:
Parliamentarians cannot do this alone, it requires a multi-stakeholder approach including but not limited to civil society organizations, media, community and traditional leaders, and faith based leaders, women, men, health professionals, private sector, and donor community among others.
Coalition Member organizations: WRA Uganda, World Vision, Save the Children, UNHCO, CEHURD, Mildmay, Save the Mothers, AGHA, National NGO Forum, Parent Network, AMREF Uganda, WIMA, KHEFO, UGAN, Mama’s Club, VEDCO, Fanta 2, Food Talk, etal.