Activists and Advocates Ask the Ugandan Government Why Aren’t Dying Mothers a Priority?

Public Interest Litigation
On 22nd May 2012 over 100 activists and advocates from different organizations including WRA Uganda, under the Coalition to end Maternal Mortality were joined by ordinary citizens, grassroots home based healthcare providers and [1]media to march from Kamwokya, Kampala suburb through Kampala capital city streets to the Constitutional Court to handover a statement to the Registrar of the Court over the delayed ruling on a Constitutional Court Case Petition No. 16 of 2011on preventable maternal deaths. We were there to ask why do women continue to die from preventable pregnancy and childbirth related causes?

“This Petition was filed on 3 March 2011 and was not heard until October 2011, when the Attorney General raised a preliminary objection and the Justices said they would be giving a ruling as soon as possible,” said Nakibuuka Noor Musisi of Centre for Health Human Rights and Development (CEHURD). “But seven months have passed since the objection, the ruling has not been delivered and meanwhile there are increasing cases of women dying every day.” A visibly disappointed Nakibuka added.

The newly released [2]report by WHO, UNFPA, UNICEF and World Bank estimates that Uganda’s maternal mortality ratio has gone down from 435/100,000 to 310/100,000 live births compared to our Millennium Development Goal 5 target of reducing maternal deaths to 131/100,000 live births by 2015. This stubborn high mortality rate compelled health activists and advocates together with the families that have been directly affected by preventable maternal deaths to file a Constitutional Court Case on preventable maternal deaths in March 2011 under CEHURD.

The demonstration prompted the Judiciary to apologize to the health activists and advocates for the delayed ruling citing majorly administrative issues. His Worship Erias Kisawuzi, Court Registrar and Spokesperson for the Judiciary attributed the delay to having fewer judges who are also handling multiple cases including election appeals on top of a backlog of over 30,000 cases before them. He committed to discuss the matter with the judges and give a feedback on 25th May 2012. The Registrar indeed fulfilled his commitment and assured a delegation of civil society advocates that the ruling would be delivered within 14days starting 25th May 2012

Shrinking health sector financing
On the same day the advocates met with ministry of finance officials to lobby for more funds to the declining health sector budget. The activists and advocates were protesting Government’s unacceptable delay to addressing maternal deaths and related health priorities. Funding appropriated in 2011 to increase the number of health workers has not been forthcoming only to be surprised by a supplementary budget request to pay and recruit health workers tabled in Parliament on May 18, 2012, yet those resources were already approved in 2011/2012 budget.

“I could not believe that my government can spend 377 billion shillings (US $154 million) annually on medical expenses of its senior officials abroad! This huge sum of money could save many women from dying in hospitals because of no medicine, no midwives,” said Dorcas Amoding of CHAIN Uganda.

“Petition No. 16 of 2011 has highlighted the urgent need for government action to end the ongoing crisis of maternal deaths. Unfortunately, the proposed health budget is further proof that dying mothers are not a priority in Uganda. We urge the Ministry of Finance to increase spending in priority areas, such as scaling up the number of health workers, improving their remuneration, and increasing provision of essential medicines and equipment to save lives,” said Leonard Okello of the International HIV/AIDS Alliance Uganda.

The health activists and advocates are seeking a court declaration that non-provision of essential maternal health workers, commodities and services in government health facilities leading to the death of women is an infringement on their rights to life and health. To which the Government Attorney General contends that this is a policy not a legal issue for the judiciary to decide.

The coalition to end Maternal Mortality is also calling on government to reconsider its proposed reduced budget for health sector for FY 2012/2013 if we are to make accelerated progress towards reduction of maternal and newborn deaths in Uganda.
[1] See some of the media coverage: Sound bites by BBC, Focus on Africa, http://www.monitor.co.ug/News/National/Judiciary+apologises+over+delayed+maternal+health+ruling/-/688334/1411606/-/r9o625z/-/index.html, http://www.newvision.co.ug/news/631274-women-rights-activists-petition-court-over-maternal-deaths.html 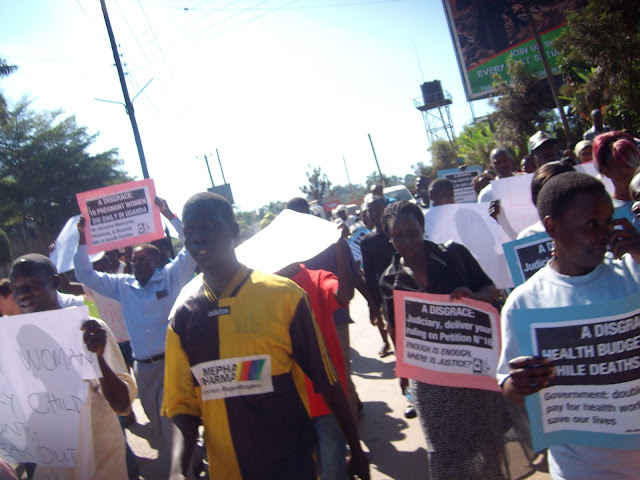